The Problem with Recruiters

The situation involving technical recruiting in its current state is unfavorable, and a software engineer needs to be on the lookout for common issues that can arise when dealing with shady recruiters.

Many unfortunate exchanges due to these issues have occurred to engineers in our own community, according to a survey that was taken.

They have described them as dishonest, hard to communicate with, and even in some cases ignorant of the very job they represent.

The most aggravating thing is when a recruiter doesn’t know what they’re talking about. A common example of this is when one cannot differentiate between the two technical languages Java and JavaScript.

They will read over the resume of a software engineer, see that they are fluent in one, and then recruit them for a job that requires the other. This results in a waste of time and money for everyone involved.

Some recruiters can also be motivated only by monetary gain, which can lead to a rushed process and a bad fit between the engineer and the client with the job in question.

Others seem to prefer to not communicate the very important details of the job.

The CEO of Parsed, Casey Garland, tells a story of a time one recruiter reached out to him without providing any details. When asked to provide information, the recruiter refused to do so.

These listed problems must be watched out for so you as a software engineer can be recruited properly into a fitting job, and can have a chance at developing productive relationships with proper recruiters and companies that wish to hire those like you.

Not all recruiters are like this. Some stand strong above the others and properly build a bridge between you and the client, and it is also important to be able to find those that are like this, for they are essential to a more valuable experience.

Recruiters Add a lot of Value

When a recruiter is what they should be: they understand the job and the field they are in, they properly communicate with you and convey the details you require, and are more interested in doing the job properly instead of pursuing the reward at the end of the exchange, then they are incredibly valuable.

The first reason is that recruiters, as stated, are the bridge between a software engineer and the client looking to fill a role.

When the process is done right, they will receive the details of the job from the client and understand what is required to have it done smoothly and efficiently.

Then, they’ll reach out to you, explain to you these details and then recruit you for the client, forging a strong mutual relationship.

The second reason is the job opportunities that they provide for software engineers such as yourself.

When they hand you over to a client, and the job is done successfully, it could open a door for you towards many more opportunities in the future: through the recruiter and with the client you have worked for.

The third reason is what they do for the clients, setting them up with someone who knows what they’re doing and is the most proper fit for the tasks they require.

Just like for what this can do for software engineers, it can give clients a serious tool in their pocket for the future if any further requirements arise later on.

Once the recruiting process has occurred initially, future jobs can be set up in less time because of those significant forged relationships.

Looking for the Right Qualities in a Recruiter

Just like how important it is to be on the lookout for negative qualities in a recruiter, it is just as essential for you to be aware of the positive qualities that can hint towards a strong recruiter.

As discussed, strong recruiters are an asset, and can help you find your way to strong job opportunities that can help set the foundation to your career.

Honesty opens the door to other strong aspects of the recruiter’s personality. An honest recruiter will tend to be more open as well, while being willing to listen to you and your concerns.

If a recruiter is dishonest, the same goes. They’ll be a closed book, won’t reveal the important details you require, and anything you say will more than likely flow through one ear and out the other.

This is telling not only of what to expect from this recruiter, but also that maybe the job they are pushing is not for you. Why else would they want to lie to you if the job was something they knew you’d jump for?

When trust can be built between a software engineer and a recruiter, the future of the relationship looks much more promising.

You should make sure to align yourself with a recruiting company that best suits your own interests, whether that be fast growing technology, health care, etc.

It is important to do heavy research into the company in question before taking any significant steps towards the future they offer.

You should also confirm their processes. For example, we at Parsed have a unique way of approaching recruiting with the Parsed Three Step Vetting Process, which includes a soft screen, coding challenge, and technical interview. 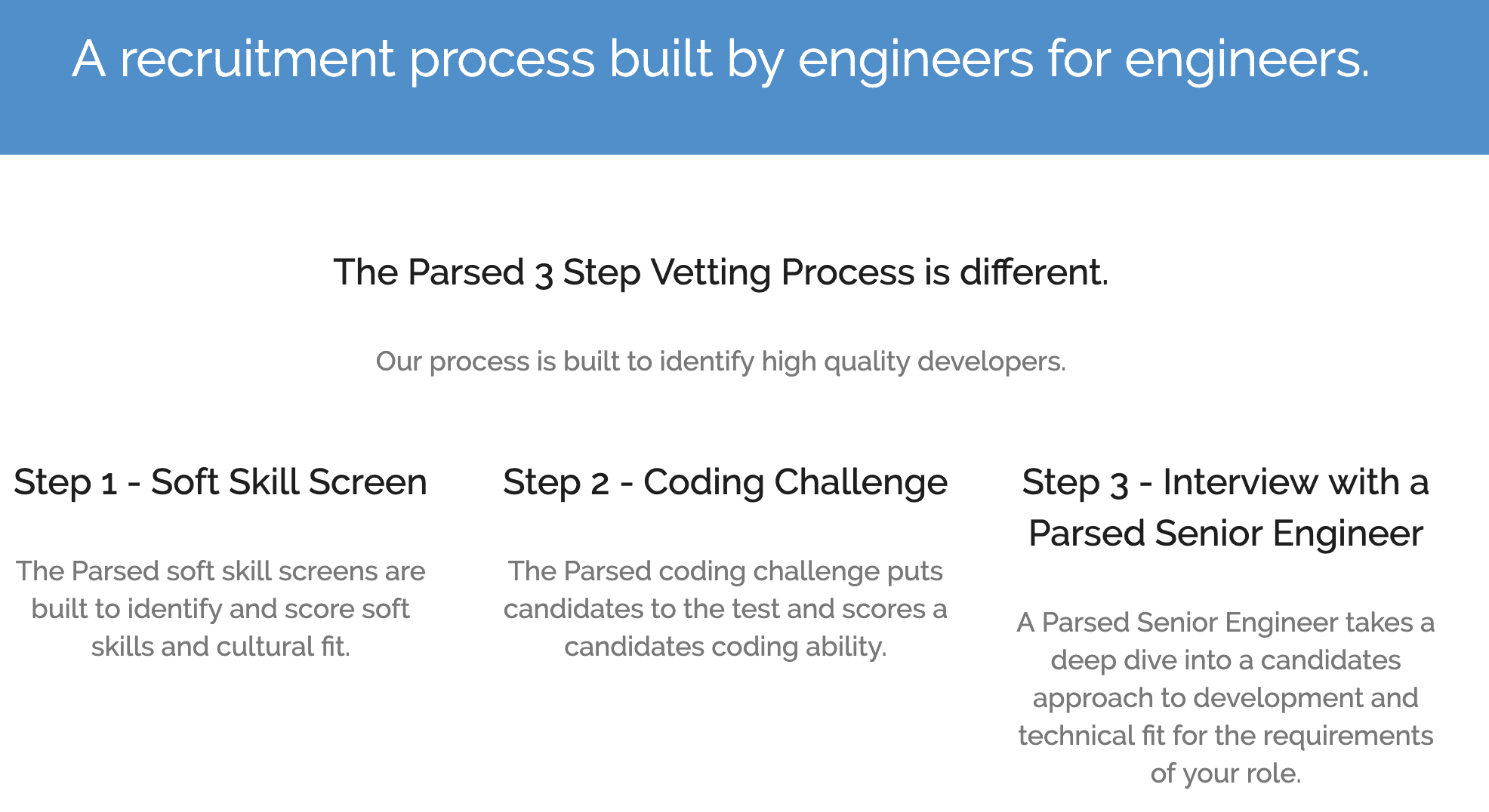 Technical recruiting is broken, unfortunately, in its current state today. Some recruiters can be dishonest, slimy, and selfish in their approaches.

It is extremely important that you as a software engineer know the signs of a lacking recruiter so you can avoid being burned by a poor process.

We at Parsed understand this because of our own extended experience with said recruiters.

In the introduction, a survey was mentioned. When it was taken, multiple engineers in our community talked about being called sometimes on a daily basis by recruiters, and on top of their harassment they were ignorant, rude, and flat out refused to provide necessary information for the engineers to make the important decision.

Be aware of who you are talking to and be on the lookout for these signs, so that you can find a proper opportunity from a proper recruiter.

Join our weekly email to get great tech jobs from the hottest companies in your inbox each week, and learn how to get hired, get promoted, and make more money.

Parsed is a mobile development company that specializes in React and React Native. We build mobile applications, augment in-house teams with React expertise, and we help companies to staff great React developers. We are a team of passionate developers, project managers, and designers that help companies to release apps on both iOS and Android.
Our website: https://parsed.io/